Why Rent a Serviced Office in Oxford? 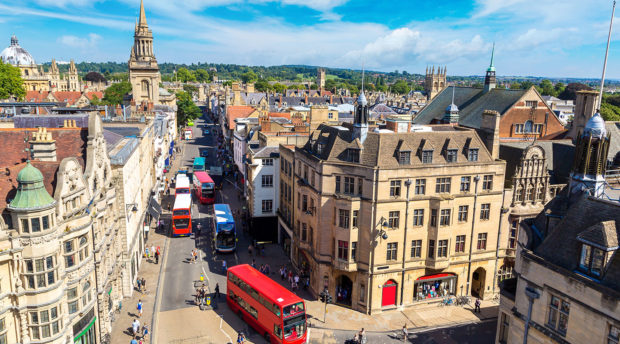 Oxford is situated in central southern England. It revolves around its prestigious university, established in the 12th century. The architecture of its 38 colleges in the city’s medieval centre led poet Matthew Arnold to nickname it the ‘City of Dreaming Spires’.

Oxford’s largest industry is without doubt, Education, and the off shoots of, such as medical research, who continuously recruit for human guinea pigs to test new treatments on. Technology also features quite highly, though again, more on the research side.

It’s also home to the Oxford University Press, which is the largest of its kind in the world, and employs over 6,000 people.

BMW also has a strong presence, making the Mini at their Cowley plant.

Tourism is another industry which thrives, with Oxford attracting over 7 million visitors per year.

Oxford is steeped in history, and the culture reflects that.  The Ashmolean Museum has a half a million years of art and archaeology on show, whilst the Bodleian Library, one of the oldest in the world, houses over 12 million printed items.

There are two main theatres, the Playhouse and the New Theatre, which house major plays and musicals regularly. This is complimented by several fringe venues who stage lesser known works.

There are two mainstream cinemas, as well as a couple of independents, who screen a more diverse range of films.

Throughout the year, many concerts performed by world renowned musicians are held across the city.

There are many bars scattered across the city, many with an interesting back story.  Cafes and restaurants are aplenty, with Cowley Road being popular for reasonably priced foods from across the world.

The River Thames runs right through the city, and it’s rare for there not to be a coxless eight or a skulls rowing team zipping up and down. Its towpaths are popular with walkers and joggers, and are punctuated by fine ale houses, should you prefer to relax.

Walton Street in Jericho is probably the hippest place in Oxford and is home to a handful of interesting shops in amongst the trendy bars and pubs. The Albion Beatnik bookshop is exactly what you’d hope it would be from the name, right down to the regular jazz and poetry gigs.

Oxford centre has two malls; The Clarendon Centre and the Westgate Centre, both of which are fairly typical city shopping centres. Cornmarket and Queen Street also have the usual clothing, jewellery, and fast food outlets, as well as the obligatory coffee shops. However, there are still some shops with their own uniqueness.

The High Street specialises in high-end boutiques and antiques shops. The Victorian labyrinth that is the Covered Market bristles with great food stalls, traditional grocers and butchers (mind out for the whole boar, rabbits and pheasants hanging up), cobblers, jewellers and a great greasy spoon.  Broad Street is home to the many faces of the marvellous Blackwell’s – worth a pilgrimage for any book-lover. And where The Broad meets Cornmarket you’ll find the cavernous wonder which is Boswell & Co, Oxford’s oldest, family-run independent department store.

Head away from the very centre and you’ll find that the different areas of Oxford have very particular characters; each offers a unique shopping experience. For example, if I should wish to buy exclusive babywear or charity shop couture then head to Summertown. For artisan pottery or a slim volume of Ginsberg it would be Jericho. If I wanted fresh tamarinds or organic fairtrade clothing, then East Oxford should be your preferred destination.

The M40 links Birmingham to Oxford from the north, leaving at Junction 9. Being one of England’s most central cities, it’s perfectly placed to access all parts of England, Scotland and Wales.

Oxford has two central train stations. Oxford and Oxford Parkway.  Both have regular trains to London.  For the rest of the UK, Oxford Station runs a comprehensive service across the country.