Why Rent a Serviced Office in Leeds? 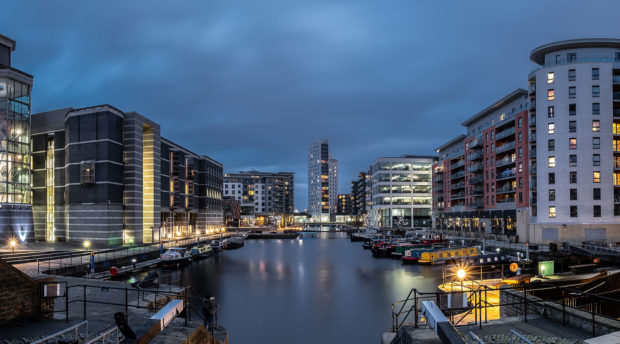 Leeds is a city in the English county of Yorkshire. On the south bank of the River Aire, the Royal Armouries houses the national collection of arms and artillery.  It was once one of the leading centres of industry in Victorian England. It has a population of around 750,000.

The main business district is found in the City Centre.

Leeds has the most diverse economy of the all the UK’s main employment centres and has seen the fastest rate of private sector jobs growth of any UK city and has the highest ratio of public to private sector jobs of all the UK’s Core Cities.  It is the largest centre outside London for financial and business services and is the headquarters for First Direct and is home to Yorkshire Bank and large Barclays, HSBC, Santander, Lloyds Banking Group and RBS Group operations.

Other major companies based in the city include William Hill, International Personal Finance, ASDA, Leeds Building Society and Northern Foods.

Leeds is one of the largest manufacturing centres in the UK, with 50% of UK manufacturers based less than a 2-hour drive away.

There is also an established creative industry in the city, particularly in the digital gaming sector. A number of large developers have studios in and around the city, including Activision, developers of the mobile versions of the Call of Duty series, and Rockstar Leeds, developers of the Grand Theft Auto series. In 2009 Leeds was the first city outside London to host the Eurogamer Expo.

Leeds Dock is a creative waterside village where innovation, culture and enterprise come together to create a place that brings a new dimension to the city of Leeds.

It’s developers, Allied London, say of it “Like breathing life into an untapped destination with unique potential, we have focused on the core values of community, collaboration and experience to create a vibrant and dynamic destination with national appeal.

Inherently welcoming, Leeds Dock is a place for all, embodied by the vast range of businesses, groups and individuals onsite. From global media companies, to local coffee roasters, thinkers and leaders, Leeds Dock has a natural gravitas that nurtures, encourages and inspires.”

Leeds United Football Club has an illustrious history. Despite going through a long period of underachieving, it is still incredibly well supported. If the oval ball is more your thing, then the Leeds Rhinos are also based in the city, and play in Europe’s Super League.

Headingley Stadium often hosts Test cricket matches, and is home to Yorkshire Cricket Team, whilst you can go and watch NH horse racing at Wetherby.

There is an abundance of golf courses in the area, as well as gyms, swimming pools and fitness centres. You can also snowboard on real snow at Xscape, or go climbing on Leeds Wall.

Nearly a third of Leeds City Centre is parks or open spaces, so there are many city walks to enjoy on a sunny day.

For culture, there is the West Yorkshire Playhouse, which puts on huge shows alongside local talent, including work by Alan Bennett.

You can enjoy comedy at the Hi Fi club, or a major rock concert at the First Direct Arena, or at the O2 Academy.

Leeds comes alive at night, whether it be catching a show, enjoying cocktails, seeing some live music or soaking up the atmosphere in some of the city’s liveliest bars, there’s something for everyone to enjoy. Leeds is also Purple Flag accredited to indicate an entertaining, diverse, safe and enjoyable night.

Leeds has some stunning restaurant, including Michelin Star winner, ‘The Man Behind the Curtain’, or try The Real Junk Food project, where all the meals are made from food about to perish, and you pay whatever you feel the meal was worth.

Leeds is a mecca for shopping, with its compact city centre which is perfectly walkable, the city is a shopper’s paradise. Named the best shopping destination in the UK by the rough guide to Britain, Leeds City Centre has over 1,000 shops. Wonderfully diverse, Leeds combines quirky boutiques with high-end luxury and the big name high street brands, so there really is something for everyone.

With shops housed in beautiful arcades and listed buildings, and a centre that can be covered on foot in a few hours, Leeds offers a shopping experience like no other UK city.

Housed under a giant iconic glass roof, Trinity Leeds is located in the heart of the city between Briggate and Albion Street. Covering 3 floors and open 7 days a week, Trinity is home to over 120 shops, bars and restaurants. You can shop late night until 8pm from Monday – Saturday and then go on to enjoy dinner and a drink at over 20 superb bars and restaurants late into the night.

Due to Leeds being central within the north of England, it is very accessible.  From London, the M1 will take you there, and from the north-west cities, it’s the M62 across the Pennines. Leeds is the starting-point of the A62, A63, A64, A65 and A660 roads, and is also situated on the A58 and A61 and is one of the principal hubs of the northern motorway network

Leeds is a major UK railway station as is very well served across the network. Trains to and from London and Manchester run hourly. Glasgow and Edinburgh also run regular services.

Leeds Bradford airport is located 6 miles outside the city centre. It flies directly to more than 75 destinations, and connects to hundreds more.  Many budget airlines fly from the airport, including Easy Jet, Flybe and Ryan Air.