Why Rent a Serviced Office in Glasgow? 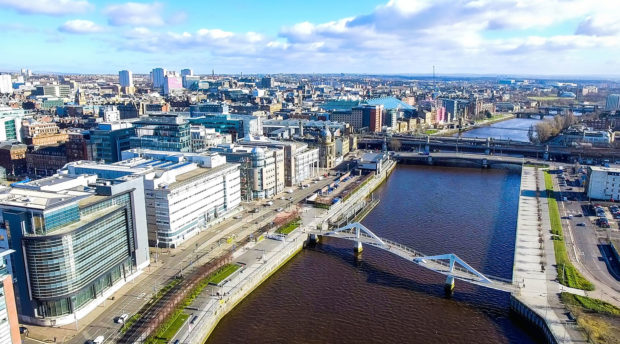 Glasgow is a port city on the River Clyde in Scotland’s western Lowlands. It’s famed for its Victorian and art nouveau architecture, a rich legacy of the city’s 18th–20th-century prosperity due to trade and shipbuilding. It has a population of just over 600,000.

Manufacturing is Glasgow’s largest industry, and along with Bristol has been dubbed a super city for manufacturing, making traditional goods using new technologies.  It has also been forecast to become a leading international force in renewable energy.

The tech sector is also going strong in the city, with the emergence of initiatives such as the Rookie Oven, a community for tech business start-ups. Another is Creative Clyde, which is an eclectic and exciting mix of businesses from TV production, broadcast, film & radio to digital media & design agencies.

Glasgow currently features at number eight on the Tech Nation list, five places behind Edinburgh, with an estimated 26,350 tech economy jobs at an average digital salary of more than £46,850.

Glasgow is the home to Scotland’s fiercest football rivals, Celtic and Rangers, who meet four times per year in the Scottish Premier League.  Celtic also play Champions League fixtures each season, and host some of the biggest clubs in Europe.

The world’s finest Rugby teams often run out against Scotland, at Hampden Park, the National Stadium.

International athletics is held at the Emirates Arena, and if you fancy trying out for the next Winter Olympics, you can get lots of practice at the Glasgow Ski and Snowboard Centre.

For water lovers, there is the Play Drome, the largest leisure pool in the north of Glasgow area, complete with wave machine and water slides. It also has a competition size swimming pool, teaching pool and eight badminton courts.

There are plenty of gyms and fitness centres throughout the city.

If theatre is your thing, then you’ll want to get yourself down to the world-renowned Glasgow Citizens Theatre, where they often rework the great classics, as well as performing new and exciting writing.

With a plethora of art galleries and museums, film and music festivals, and wonderful gardens and parks, you’ll never go short of options.

As you would expect from such a city, there are bars, clubs and restaurants galore.

For a bit of retail therapy, Glasgow has a diverse range of unique and independent shops.  There are many shopping centres in the city, such as the Buchanan Galleries shopping centre. Located in the middle of Glasgow city centre, a city recognised as one of the top retail destinations in the UK, or Loch Lomond Shores, which is a great day out with lots of things to see and do, including designer shopping, an aquarium, restaurants and cafes and outdoor activities.

Glasgow can be reached via the M1 (A) from the south of England, or the M6 from the north of England.  The M8 links Glasgow to Scotland’s second largest city, Edinburgh.

Glasgow Central is very well served with regular trains from all major UK destinations. Trains to London run as often as every 40 minutes.

Scotland’s major airport, there are direct flights to a lot of the world’s major destinations. Several budget airlines, such as Easy Jet, Ryan Air and Flybe, fly to dozens of European airports.