Why Rent a Serviced Office in Belfast? 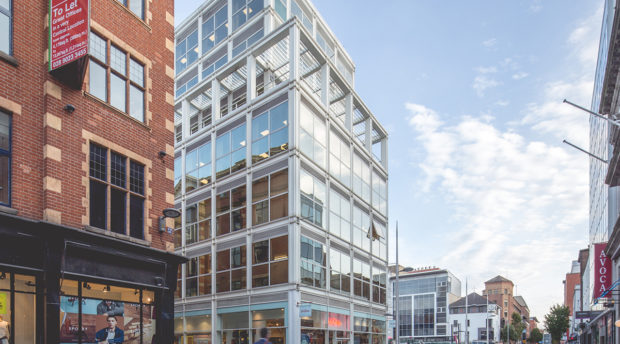 Belfast is Northern Ireland’s capital. It was the birthplace of the RMS Titanic, which famously struck an iceberg and sunk in 1912. This legacy is recalled in the renovated dockyards’ Titanic Quarter, which includes the Titanic Belfast, an aluminium-clad museum reminiscent of a ship’s hull, as well as shipbuilder Harland & Wolff’s Drawing Offices and the Titanic Slipways, which now host open-air concerts.

Belfast is gradually shifting from bomb-scarred backwater after the Troubles to a hub for the knowledge economy, especially in financial technology, cyber security and television production. In 2015 Belfast experienced the strongest economic growth of any UK city. That same year the City invested £34 million of government money in local economic growth.

This money has gone towards two major developments which has seen the regeneration of the Titanic Quarter, and the erection the Obel Tower, a skyscraper set to be the tallest tower on the island until eclipsed by the U2 Tower in Dublin. In 2007, Belfast’s launched its vision for a World Trade Centre (currently a ‘virtual’ centre but with plans to become a physical building) which aims to promote the city to the international business market.

Today, Belfast is Northern Ireland’s educational and commercial hub. It is now in the top five fastest growing regional economies in the UK. Over the past 10 years’ employment has grown by 16.4 per cent, compared with 9.2 per cent for the UK as a whole.

Belfast is fast becoming a hub for tech start-ups. The transformation of the Titanic Quarter has led to an exciting generation of tech innovators and companies, some notable companies are now operating in Northern Ireland, from animation to biotech and game development to a robot that brews beer. The Northern Ireland Science Park situated within the Titanic Quarter is home to 110 companies, and Mary McKenna, CEO of Learning Pool notes the strengths of Belfast and why it is a good place to start a tech business, “It has a lively social scene, costs are lower, there’s space, its well-connected”.

For sport, whether you get your kicks Zorbing, through challenging adventure activities, or just walking, running, cycling you’ll be spoilt for choice. Maybe you’re more of the golfing, boating or bowling type – if so, Belfast has that too.

Belfast may be a small city but don’t let the size fool you – because it’s big on excitement. Once the home of the Irish linen industry, tobacco production, rope making and the world-famous Harland and Wolff shipbuilders, Belfast lays claim to a unique history. And there’s something for everyone to love. Shopping, tours, world-class dining, block rockin’ beats, you name it – Belfast has it.

Belfast is Music City. Traditional. Classical. Country. Jazz. Blues. Rock. But what really sets it apart from other cities is that the music is ‘of the people’. The talent is indigenous, it’s now; it’s here. From Van Morrision to Snow Patrol, Belfast is the happening place to be.

For a city, the size of Belfast the choice of places to eat is surprising. It offers everything from fine dining, brasseries and bistros to gastro pubs, cafes, coffee shops and some of the best fish & chips around.

Smart and stylish, sports, live music, nightclub or gay and lesbian; whatever your taste in nightlife this city has it in abundance. Punters are out in their droves most evenings in the city, sampling the best of what Belfast nightlife has to offer. Why not set your feet moving and your heart racing at one of the city’s nightclubs or relax and imbibe in a modern smart and stylish bar or more traditional historical hostelry?

Shopping in Belfast is special. Why? Because it has high street stores, family owned businesses, designer boutiques, markets and the incredible Victoria Square and CastleCourt shopping centres – all within minutes of each other.

Central and Gt Victoria Street Stations are the city’s two major terminals, with Dublin only two hours away by train. Regular services also operate to Derry/Londonderry, Bangor, Larne, Coleraine, Portrush and the suburbs of the city.

Belfast International Airport has daily flights from all four London airports, as well as Birmingham, Manchester, Glasgow and around 10 other British airports. International flights are available from North America and a number of European cities.